WE WALK THE WALK---DO WE KNOW THE TALK? 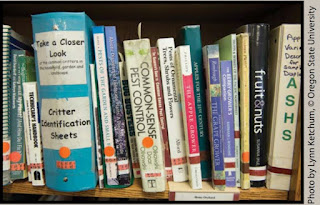 So many words in a botanical glossary, some are easy to pronounce, others can be a bit of a tongue-twister.  Whether we use them or not is not important.  What is important is that when we hear or see them written we can feel a little smarter than we were.  We may just need to jog our brain a bit to remember we really have heard them before.

ALLELOPATHY  The excretion by some plants of compounds from their leaves and/or roots that  inhibit the growth of other plants.

APOSEMATIC  The characteristic, such as a color, odor or other markings, some insects have to serve as a warning to predators that it's toxic and they should stay away.  Red, yellow, black and white are the most common colors.

CANDELABRUM  A strong dominate rose cane with accelerated growth that originates from a bud union and explodes with many blooms.

DENTATE  Having a toothlike or serrated edge that projects outward, such as a dentate leaf or root.  French lavender (Lavandula dentata) and ligularia (Ligularia dentata) have dentate leaves.

ENTOMOPHILY  When plants are pollinated by insects, that process is called entomophily.  Both insects and plants benefit from pollination,.  As they travel from flower to flower, insects gather nectar as a food source, at the same time spreading pollen to other flowers, which aids in plant reproduction.

EPINASTY  An abnormal downward-curving growth or movement of a leaf, leaf part, or stem.

ETIOLATION  Development of yellow, long, spindly growth on a plant as a result of insufficient light.

FASCIATION  Distortion of a plant that results in thin, flattened, and sometimes curved shoots.  Can affect asters, geraniums, primroses, and lilies.  May be caused by a bacterial or viral infection.  Can return but doesn't spread.

GLAUCOUS  Covered with a grayish, bluish, or whitish waxy coating that is easily rubbed off.  Blue spruce needles are an example of glaucous leaves.

HAUSTORIUM  A modified hyphal branch (a single fungus filament ) of a parasitic plant.  Grows into a host plant's cell to absorb food and water.  Writer's note--not all of nature is warm and fuzzy! 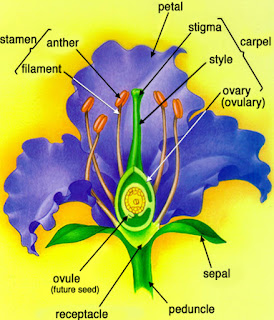 MESOPHYLL  A leaf's inner tissue, located between the upper and lower epidermis, where raw materials (carbon dioxide and water vapor) are held for use in photosynthesis.

PEDUNCLE  The main stem supporting a cluster of flowers (as opposed to a pedicel, which is the stem of an individual flower).

PLEACH  To intertwine branches of trees, vines, or shrubs to form an arbor or hedge.

REMONTANT  A plant that has the ability to produce flowers more than once in a growing season .  It is common for modern roses (Rosa hybrids) to bloom from spring through fall.  In other plants such as hydrangeas (Hydrangea spp) and bearded iris (Iris hybrids) it is less common but much coveted. 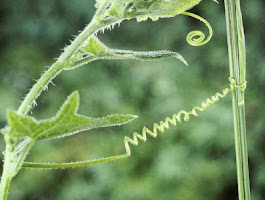 THIGMOTROPISM  The ability for vines to find something to grab onto--plants can detect and respond to solid objects.  Climbing plants and vines use  tendrils to twine around solid objects to gain support.  That has always been one of my "wonders of nature"--how did they know how to do that!