Some workdays at the OSU Master Gardener Plant Clinic are more exciting than others, especially when the "chief bug lady" gives a shout out of "I'VE NEVER SEEN THAT BEFORE". 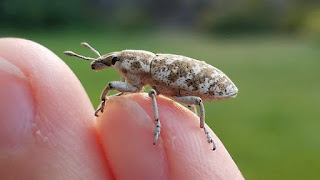 Two days before a shift at Plant Clinic, I found an insect on a lawn sprinkler.  It appeared dead and since we are always looking for insects for you know who, I put it in a jar with a few leaves, just in case there was a breath of life left.  Apparently there was.  On the second day of capture it looked like there had been an effort to find an escape hatch but with no luck.

My clinic partner and I started the search for identity using the tools we've been taught to use: books, computer sites, microscope.

After close to two hours we found a match on Bugguide.net. The specimen is a Cyphocleonus achates, a knapweed root weevil.  The weevil is a valued biological control and is host specific to spotted and diffuse knapweed.  The integrated pest management approach has been sought in controlling the weed by the releasing of C. achates in 13 states including Oregon. 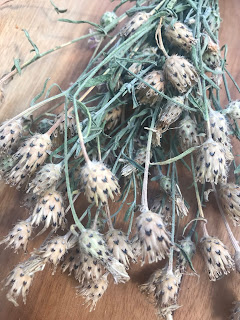 The reason I thought it was dead is that it can't fly.  Their defense mechanism is to play dead.  For a predator I suppose half the challenge is catching your prey in motion.  Why bother with something that appears dead?

You may be wondering why I used a bouquet of dried knapweed.  If you look at the dried seed heads and compare that to the brown-gray mottled coloration of the weevil you will see the wonderful camouflage nature provided.  To view the weevil go to Bugguide.net, click on images for Cyphocleonus achates.

C. achates overwinters as larvae in the tap root of the knapweed.  Adults emerge from late July through late September.  The adults feed on the knapweed leaves, preferring tender leaves in the center of the rosettes.  The eggs are laid on the plant root just below the soil and hatch in ten to twelve days.  The larvae burrow into the root and commence feeding on the root of the plant.  The larvae destroy the interior of the tap root and expose it to bacterial and fungal invasion which helps kill the plant.

I left Plant Clinic in a state of wonderment--do I have more, I certainly have plenty of knapweed on my two acres.  I should probably warn my neighbors not to worry, I'm just crawling around looking for the knapweed root weevil.

Be sure to check out the Gardening: Get Good At It segment on Tuesday August 27 on KPOV 88.9 FM "The Point between 9-9:30 am and learn all about "Getting Ready for Fall."