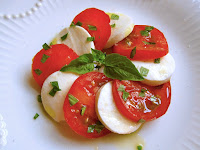 Once a month I gather with three long-time friends for a brown bag lunch.  We rotate houses, bring our lunch and celebrate life in general be it good, bad or ugly.

September was my turn and we participated in an activity that made us realize fall and harvest time is on its way.  We taste tested the tomato varieties I grew this year.

Some were the tried and true, others were new trials.  All in all, we tested 5 of the 8 varieties.  Sweet Aperitiff, a cherry, and Early Bush Beefsteak, a slicer, needed another week.  We had tested Beaverlodge, a Canadian developed slicer, last month with lots of kudos.  It will be on the 2020 list to grow.

Orange Slice, an exclusive from Burpee won an excellent flavor award from the testers.  Some "critter" also found it tasty, at least partially.  When I reached to pick a very large specimen, I discovered it had been half eaten on the vine.  The damage was far greater than a hornworm, deer didn't get accused this time--maybe raccoon, skunk or rock chuck.

Cobra, a greenhouse variety I have grown for years also rated the "now that's a tomato" excellent flavor award.  Territorial Seed lists it as also grown outdoors so maybe I will try one outdoors also next year.

Applegate, also a greenhouse variety that I have grown for years is very productive .  Testers agreed that it was more acidic than the first two.

Rocket, Camp Joy,and Sweet Million will also stay on the list for 2020.  The comment on Celebrity was "tastes like a store bought".  Siletz may be early but I find it lacks flavor.

The question did come up as to the how's and why's of the tough skin on some varieties.  The "Magic Machine" has all the answers and did confirm some of our thoughts.

Roma tomatoes will naturally have thick tomato skins because they have been bred that way.  Romas are often used for canning and drying.  The thick skins are easier to remove when canning and the thick skins also hold together better when dried.

High heat can cause a tomato plant to have thick skin.  In high heat tomatoes can be scalded by the sun.  In order to protect the tomato, the plants will start producing tomatoes with tougher skins.  Nature protects its own.  During a sudden heat wave you can provide some shade during the hottest part of the day if possible to lessen the possibility of the tough skin.

When tomato plants have too little water, a survival reaction sets in.  It will take steps to conserve the water it does get by growing thicker skins.  The thicker skin holds the water in better.

At this time of the year it would be wise to pinch out any new blossoms as there won't be time or plant energy to ripen what is on the vine plus develop new tomatoes.

Yes, the season is ending--where did all the time go?