Which is it?  I can't decide.  Every time I hear of a tomato variety that is new to me I get an adrenaline rush.  I immediately want to look it up, track down sources, try to learn the origin--European or US developed.  Then the BIG question, will the variety grow in Central Oregon?  So many questions to be answered.

I never feel the impulse of "I want it NOW".  What I do want is to immediately start researching. 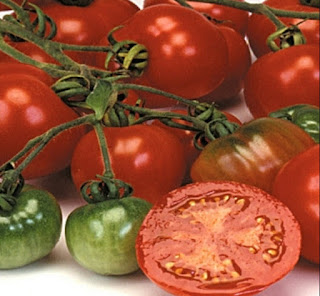 I can  thank friend Toni for sending me into a tailspin of who, what, where and when's.  The tomato new to me (thanks to her) is 'Bloody Butcher', a horrible, but certainly memorable name.  I have already created several scenarios in my mind as to the origin of the name.  With Halloween just around the corner, how could I help myself?

What I have learned so far is that 'Bloody Butcher' is a reliably early heritage variety, it's origin is believed to be Germany.  The 3-4oz cluster tomato ripens in 55-70 days, about the same time as Early Girl. There were several reports that felt it is tastier than Early Girl.  The taste reports ranged from "unique, sweet tangy flavor", to "rich tomato flavor"  to "tasteless".  It is an open pollinated variety which means the seeds can be saved.  The plant is indeterminate in growth so production would be over a longer period of time.  It was rated as being an excellent producer in the greenhouse as well as the open garden.

The variety is potato-leafed.  The term may be unfamiliar to gardeners who are early into tomato culture.

The potato leaf lacks the lobes or notches seen on regular leaf tomatoes.  They look like the leaves of a potato plant.  The young potato leaf seedlings are less obvious in their difference as they do not show this lack of serration until they are a few inches tall.

At the end of the day, potato leaf tomatoes can be chalked up to just another of nature's curious quirks. There doesn't seem to be any scientific involved explanation other than, after all, tomatoes are in the same nightshade family as potatoes.

I remember in my early days of tomato growing and the first variety we grew of potato leafed plants, I was sure there was something wrong with the plant.  That was long before research could be accomplished with the flick of a switch and a mouse!

Be sure to listen to the Gardening: Get Good at It "Spring Bulbs to Plant Now" segment Tuesday October 20 on KPOV 88.9 FM between 9-9:30 am.