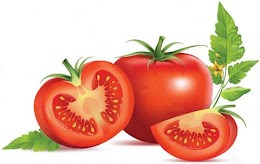 In 1993 the editors of Organic Gardening magazine published a 56 page paperback , '300 Super Tomato Tips'. It is the perfect size to have handy when you find yourself in those sit and wait moments. The paperback covers all the basics plus provides more information as to the why's and wherefores'.  Of course, 30 years later some statements and procedures are up for question.

Grow lights were beginning to come to the attention of home gardeners.  There was a learning curve regarding hours and distance of the lights.  The natural inclination if the plants were spindly and pale, was to fertilize.  The problem was the plants were starved for light.  It then became a common practice to start on a very light fertilizer regiment only when the first true leaves appear. 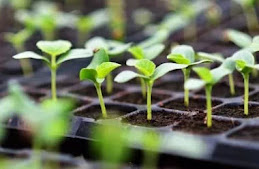 In 1988 Clemson University decided to put the seedlings through a stress test by chilling the seedlings  at 35 degrees F for up to 18 hours a day for two weeks before transplanting.  Earliness, productivity and quality of the crop were unaffected according to the test results.  Hmmm- makes you wonder, not sure I want to give up my row cover.

Do we really know the reason for the process of hardening off?  Yes, to accustom the seedlings to air currents and temperature change.  But how?  The young plants adapt to the change of air movement from indoors to outdoors by changing the 'mosaic of cells on the outer layer of the stem.  The process usually takes five days.' 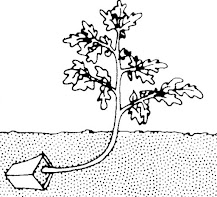 Something to think about---if the plants have had a surge of growth before you could get them in the ground, you might consider an alternate planting method.  Rather than plant them to a deeper depth than usual, lay the plant diagonally in a shallow trench with most of the stem buried.  Roots will develop from the underground segment of the stem.

That planting idea may be useful in our climate.  Our soil has a hard time warming to any depth.  Perhaps the diagonal planting has its merits in that the roots are closer to the warmer soil.

The golden rule for seed choices in Central Oregon tomato growers is to add 14 days to listed maturity projection to compensate for the high differential between day temperatures and night temperatures.  The count down begins when the healthy plant is planted to your garden to the time you harvest your first ripe tomato. 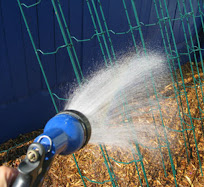 Before we get too far into the culture of home-grown tomatoes, a question---.  Do you clean your tomato cages?   I have never thought about it since we aren't plagued with the tomato diseases many growers in hot humid climates have.  But, times are a-changing so who knows what might be ahead.

The advice listed in the manual came from a plant pathologist at the University of Tennessee.  Bacterial spot, Bacterial canker and bacterial speck can be easily carried over from one year to the next on cages and stakes.  The professor also felt early blight and fusarium wilt can be carried along also.  Cleansing method is to dip or spray in a 10% bleach solution.  Wait  5 minutes, then rinse before using.

Throughout the discussion of tomato varieties for various climates, mention is made of OSU's Dr. Baggett, Jeff Lowenfels in Alaska and trials from Territorial Seeds.  A list of tomatoes from the former Soviet Union were listed for colder climates.   I was not familiar with any of them.  As a test to see if they were still available I decided to find a source for 'Olga's Yellow Round Chicken'.  Much to my surprise, I did find it at several heritage seed companies.  It is a Russian heirloom from Siberia collected by Bill McDorman of Hailey Idaho and introduced by Seeds Trust in the early 90's.

McDorman also brought 'Sasha's Altai ' to the attention of tomato growers in the U.S.  That tomato from Russia was chosen by Organic Garden magazine as one of the 10 best early tomatoes in the world.  It is listed in the Adaptive Seed catalog located in Sweet Home, Oregon.  So many choices are really available for us.

A last thought from the Tomato Tips I found merit in sharing  came from Denver Botanic Garden's community garden project.  When warm weather finally ends, the strategy of care is changed. The gardeners mulch beneath the plants with compost, then they carefully remove the vines from the cages and lay them on the ground.  The plants are then covered with floating row covers,  which protect them from light frost and collects the heat given off by the compost.

Sounds like a method we should try when the cool days of fall set in.