However, research has led us to more positive results.

We have waited weeks to see significant growth in our gardens.  Finally, buds are opening and we can look forward to bouquets from our cutting gardens.

Cut flowers can quickly lose their beauty.  Many tips from family and friends are offered to extend the life of cut flowers.  What works and what doesn't?

Once in the vase and enjoyed for a day, the common cultural practice is to trim stem ends at an angle under running water as well as refreshing the water every two days and retrimming the ends.  It quickly becomes another overwhelming task.  Instead of treatment, we start throwing out the wilted and bedraggled looking stems. For cut flower bouquets from a store that come with a packet of plant food you have a foolproof packet that should be used.  But what can we use at home?
I went to my trusty file cabinet and pulled the file on annuals and found an extensive article on plant food additives.  The article was based on a research project from the University of North Carolina Charlotte Botanical Gardens testing six additives against plain water. 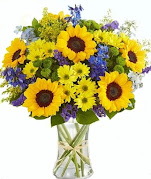 The tests were conducted on common cutting flowers: sunflower, Shasta daisy, lisianthus, celosia, and yarrow.  Tests lasted for 15 days and were rated with a number system: 2 was "good" meaning that they looked like they had just been picked, "1" was acceptable meaning they were good enough to keep in the container: and 0 meant they had to go.  The test included the following additives.
WATER: plain water was great in overall quality up to an average of 7 days, lasting nearly as long as the commercial floral foods.  Average: 6 to 14 days.  Rating: Good-2
VINEGAR & SUGAR: How much: 1 Tbs sugar and 2 Tbs vinegar per quart of water.  This treatment produced the worst overall results with flowers starting to wilt by day 2.  Stems started turning brown and moved upward toward the flower --the quickest being the sunflowers, probably due to the larger stem which absorbed the treatment faster.  Lisianthus took the longest to show impact, Average: 2 to 7 days.
SUGAR: How much: 1 Tbs per quart of water.  Flowers did well overall until about day 6, leaves began to wilt on celosia stems, flower4 petals did not appear to be affected.  Flowers lasted, but they didn't look great over the long haul.  Average: 5 to 10 days.
BLEACH & SUGAR; How much: 1 Tbs sugar, 1/2 tsp. bleach per quart of water.  Flowers generally managed to last through the duration of the experiment, brown spots and blotching on the leaves were noticed.  Flower petals seemed unaffected by the bleach.  Container water stayed fairly clear.  Average: 7 to 10 days.  Rating: Good-2

LEMON-LIME SODA:  How much: 1 part lemon-lime soda to 3 parts water.  This was rated as the best home additive.  The theory behind using this is that the sugar offers food to the plant while the citric acid inhibits bacteria.  The results rivaled the commercial products for longevity of acceptable flowers but not overall quality of the flowers, plus the water was really cloudy by the end.  Average: 7 to 14 days.
LISTERINE:  How much: 1 Tbs per quart of water.  The benefits of using Listerine is its antibacterial qualities.  This treatment had a similar result as the plain water control group.  Did well up to a point, then declined rapidly.  The downside with this treatment was that the smell of Listerine masked the fragrance from the flowers.  Average: 7 to 9 days.
COMMERCIAL PRODUCT:  'FloraLife Flower Food 300' was used-2 tsp per quart of water.  Flowers treated with FloraLife Flower Food 300 lasted the longest, looked the best and the water remained clear.  Ingredients are proprietary but the company describes the product as containing "a sugar for nutrition, an acidifier to lower the pH of the water and a class of compounds called stem absorption enhancers.  Average: 9 to 14 days.

CONCLUSION for me:  If I were planning a special event I would purchase the commercial product as it would buy me some time in eliminating a last minute job of bouquet gathering.  If saving planning time wasn't a concern, I would use the Bleach & Sugar combo.  That combo has been around for a very long time!